If you are looking for ways to enhance your ability to utilize your backyard or outdoor space, there are a wide variety of structures that you might consider building to deal with the outdoor elements present in your area. 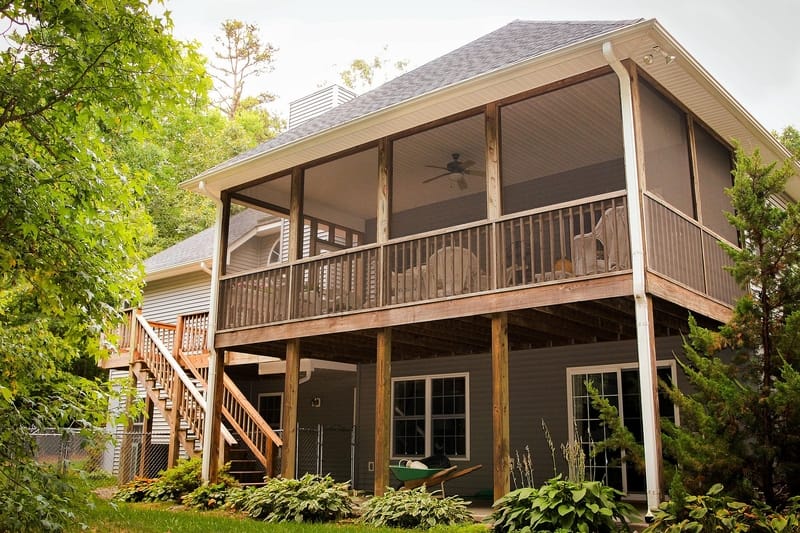 There are some options out there that are quite distinct, such as a gazebo vs a pergola. But two options that might both be high on your list due to their similarities are an outdoor pergola or a screened in porch. In fact, when comparing a pergola vs a screened porch, the two structures can be quite different or actually very similar. It all depends on their construction.

On one hand, pergolas can be very minimalistic, perhaps nothing more than two upright support beams and some rafters spread apart. (They often do have more to them than just this, but a streamlined, minimalist look is their calling card.)
Meanwhile, a screened-in porch can be just like a room in the house that just happens to have screens instead of glass windows, creating a hybrid space that is neither truly outside nor truly inside. In these cases, the roof would have shingles just like the main structure, the siding would match the home, and the porch would be seamlessly integrated into the home, probably sharing the same foundation or built around a raised or upstairs deck. Did you know that it is possible to add a pergola to your existing deck?

However, you may also choose to build a screened-in pergola that would blend elements of both these structures. A pergola with screens (screened-in pergola) and shades might have them run from ground to ceiling, or it may have some short paneling along the sides to create a window like effect—which is what you would probably expect to find on an outdoor screened-in porch.

The foundation of such a pergola would be a deck or concrete slab directly attached to the home, while the screened-in porch would share the foundation of the home, extend seamlessly from the edges of a deck, or directly from a concrete slab. So, there is some crossover between the two when it comes to foundations. However, the pergola is more likely to appear tacked on to the top of the deck or concrete, while the porch would blend into the original construction. 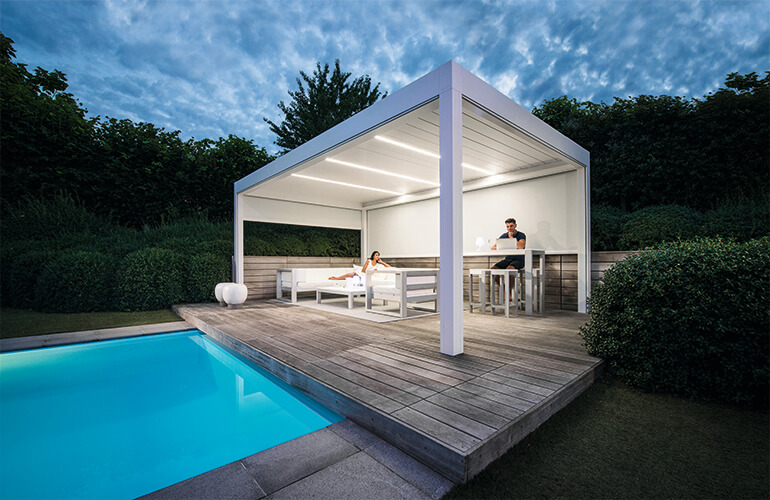 The main difference between these structures comes down to the roof. A pergola has a distinctly minimalistic roof. A screened-in pergola might have just a screen across the top of the rafters to allow some light and some shade, or it might have full coverage across the top. However, even a pergola that has an aluminum or vinyl roof in addition to the rafters will not have a roof quite like a screened-in porch. The roof of a screened-in porch will be shingled like a house and much more extensive than the roof of any pergola.

While structurally the main difference between these two structures is in the roof, you can usually tell at a glance which is a pergola and which is a screened porch. The pergola will stand out from the home and probably be made from a different material, most likely a natural wood or aluminum. On the other hand, a screened porch will blend with the house and mimic or utilize the same siding and roof.

Which Do You Want, a Pergola or a Screened Porch?

Choosing between a pergola or a screened-in porch usually comes down to the climate you live in and the purpose of the structure. There are distinct climates that require one or the other for their unique purposes.

Often found in southern states such as Florida, the screened-in porch was developed specifically for bug control. If you live in a hot and humid climate where bugs are often a major problem (particularly during the warm summer months), then you may benefit from either a screened porch or screened pergola to keep them at bay.

A thin mesh screen will keep mosquitos, palmettos, lovebugs, and other insects from invading your porch as you enjoy your outdoor space in relative peace (and hopefully moderate humidity).

If you live farther north where cold nights and winter weather help to keep the bugs at bay, then it is unlikely that bugs will be a major issue for you on your pergola. One exception may be if you live very close to a slow-moving river or stream or a standing body of water, however, even then your bug problem would be seasonal.

To decide if you want a screened porch or a screened-in pergola for your own backyard space, we recommend you take some time to sit out there on a warm summer night. If the bugs are an abhorrent nuisance, then you will quickly settle on a screened-in option.

If this does seem to be a seasonal issue, however, you may look into covered pergola ideas for their simplicity and elegance in comparison to a covered porch. Just the addition of a bug light or fire pit will likely be enough to keep the bugs away when needed rather than committing to confining yourself within screens year round.

Either way, a pergola or a screened porch can help you to capitalize on your outdoor space under any conditions.

Be inspired by our numerous successful projects and discover the various models and all the options. Download the digital brochure here!